(for larger print, please click the “+” icon at the lower left of this screen) 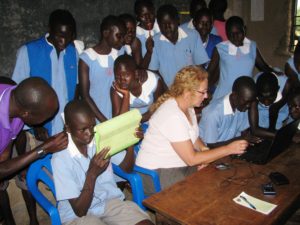 In October, Charlie and Susan Roscoe visited St. Bakhita Nursery and Primary  School. They were accompanied by Jeff and Jane White. This was Jeff’s second trip and Jane’s first. While at the school, each had fun and worked hard participating in different aspects of education and administration. Jane introduced students in Primary 7 to a laptop computer by helping them write stories to include in the SFR newsletter. Their enthusiasm as well as the interest by several of the teachers will guide us in planning to provide a broad level of computer support and equipment as funds and expertise allow. Jeff extended greetings from SFR to each class and emphasized the importance of continuing their education and working hard to advance to the next level. Jeff also organized the teachers in breakout groups to develop a consensus of ideas to limit class size consistent with providing education for the maximum number of students along with manageable teaching loads and limited financial resources. 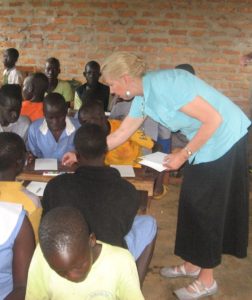 Susan and Jane worked with groups of students and teachers on various art projects. In the Middle Nursery classroom, the 70+ students were given printer paper, boxes of crayons, and pre-made stickers of art objects and the alphabet. Susan and Jane marked each masterpiece with a red check mark and “Good!” before the children took them home when their school day ended at 1:00 p.m. In the P2 (second grade) classroom, with 60+ children, we provided watercolor paper, colored markers, blunt scissors, peel-and-stick sheets, and glitter glue. Jane created an example to show them how to use each item, and they were soon making their own colorful artworks. Leftover pieces of the peel-and-stick sheets were put to creative use as face decorations. See the website for photos. The final classroom to work on art projects was P5, with more than 50 students, and their materials were paper specifically for watercolors and pencils, colored pencils, jars of water based paints, and brushes. As always, despite the crowded classrooms the children were quiet, cooperative, and focused. As we do every year, we left the remaining art supplies in the room behind the head teacher’s office for future use. Many thanks to teachers Rosemary, Pauline, Mathew, and Raphael for their enthusiastic help. 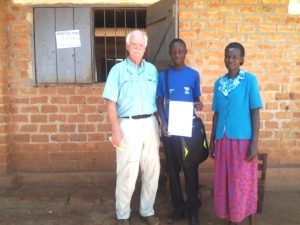 The operating budget for St. Bakhita Nursery and Primary school for the school year beginning in February, 2015 has been approved by the teachers and SFR. The process, which started for the 2013 school year, has the teachers develop a list of needs, from salaries to text books to supplies. Charlie Roscoe, on behalf of SFR suggested $34,000 as the amount of money that will be raised from SFR donors to support the budget. Charlie and the teachers in an interactive meeting discussed all the elements of the list of needs and agreed on where cuts should be made to make the budget equal the SFR commitment. The budget includes a 5% increase in teacher pay to $1,225 per year as well as provision for weekend and term break classes for seventh grade students as they prepare for the secondary school entrance examinations. A copy of the budget is available by contacting Charlie.

Based on the heartfelt request of students and parents, we added a seventh grade (P-7) at St. Bakhita Primary and Nursery School in 2014. Instead of students commuting over two miles to the Star Self Help Primary School by foot to attend P-7, the last grade before secondary school, 30 graduates of P-6 were able to attend P-7 closer to home at St Bakhita. The students who successfully complete their final examination hope to enroll in Panyadoli Secondary School in February. Panyadoli abuts St. Bakhita in the settlement. Through the generosity of donors to Schools for Refugees, students now including St Bakhita graduates in their first three years of secondary school are provided full scholarships. 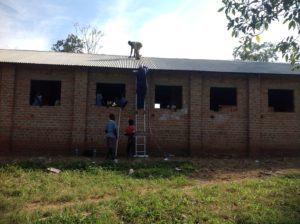 The Parent Teachers Association at St. Bakhita Nursery and Primary School meets periodically to discuss its support for the school. Areas of responsibility include playing an active part in recruiting teachers, upkeep of school facilities, oversight of construction projects, providing maize for student meals, providing a revolving fund to help parents buy school uniforms and supplementing SFR funds in limited amounts for teacher support. Charlie met with Angelo, the chair of the PTA, to discuss the plans to build a new latrine for the teachers, adding doors and windows and paving floors for the new classrooms, designing a new building to house a technology center and teachers’ room, connecting to the newly installed electricity grid, replacing the cooking kitchen, building a security fence around the school and replacing student desks and chairs. The level of interest in their childen’s education is well informed and genuine, as reflected in the attitudes and discipline of the students.