On September 30, 2012, Charlie Roscoe, Bill Morrell from Brunswick, Maine, USA, and Mark Woodsum from San Diego, California, USA, arrived at St. Bakhita Nursery and Primary School. We were greeted by Michael Anywar, the teacher representative for St Bakhita School and Business Manager in Uganda for Schools For Refugees, and Mathew Ochola, the recently elected head teacher. Shortly after entering the school grounds on Sunday, a dozen children gathered to greet us. As we met in the small office to unpack suitcases filled with supplies for the school, the students looked on with wide, curious eyes. Of special interest were the soccer (football) balls which Bill had carried in his luggage, and the volleyball and basketball which Mark carried for the students.Charlie, Bill and mark attended classes, set up the volleyball net, basketball hoop and net ball courts, organized and participated in football games, and distributed over 300 pen pal letters from students at Harrison Middle School, Yarmouth, Maine, USA. During the week, Bill and Mark introduced the teachers and students to Frisbee tossing and whiffle ball. Leftover rope used to secure the volley ball net was quickly turned into a jump rope at which many of the girls excelled. The school yard during recess and after school was filled with new sports, where previously, football and modified net ball (without a hoop) were the only games played.

We brought an Apple iPad for Michael to use for expanded education offerings including teaching aids, movies for students, and business and communication functions. Bill explained functions and operations to Michael, and because of that as well as his help in diagnosing problems with the school generator, he was named the honorary director of facilities and technology!

Michael gave a tour of the expanded garden on the school campus. The school property is approximately ten acres, of which four acres are newly under cultivation by the students, for maize and other vegetables for porridge and teachers’ lunches. On a buying trip to Bweyale, Bill bought hoes and slashers for the students to use as they plant and weed the gardens and cut grass on the playing field. Previously, they had one hoe that the students passed around as they gardened. Now, eight or more students will be able to hoe at the same time.

A few months ago we traveled to paraa national game park. We were fourteen in number; seven girls and seven boys
which came from  different classes in st Bakhita school..this trip was an interesting one just because it was our first time to move out of the settlement and especially to a national park. It was on the 06/oct/2012 in the morning of Saturday at 5:30am when we start off from the settlement. We passed the karum bridge on the way to northern Uganda befor turning off to the road heading to Arua. We drive for about 60-70kms befor Approaching the packweack Bridge. And turning to our left were we entering through the northern bypass into the park through a small bridge which we did recognize it name. At the park gate all the cars came to stop. We wonder what was happening. We saw Michael and Charles Roscoe jump off the car heading toward the small office at the gate. As we waited we posted for photos at the gate which the PTA chairman kept on taking. Soon Michael and Charles were back as we set off on our game tracking but later we learned they were paying for the pass into the park.

On the first eye what we saw look like some big ant hill not knowing that those were herd of elephant and later we recognize them as our car approach them and this was the start of our long journey. We drove through the park up a point where it was written game tracking and we took that route just few minutes we saw what we call the African great giraffes just two of them but later on our way back we saw plenty of them apart from the hippos which we were told count the highest.

Population in the park driving the name pa-raa which mean homes of hippos. Other animals we saw were buffalo, waterbuck, warthog and Uganda kob. At about 1:00 we reach to the ferry side than we cross the Nile on the ferry to the Masindi side. Here we had a lot of time to play around and take our pack lunch. By 2:00 pm we enter the Seabill boat and rided up to the falls and came back to the shore where our drivers were waiting for us. From here we got back into the car and drive our way back seeing many animal as it was coming to evening and many animal are out eat and soon we at Packwack bridge and passed up to Packwack town and than made our way back to the settlement. As we enter the settlement the student start to sing song of happiness bring us finally to St Bakhita school compound. 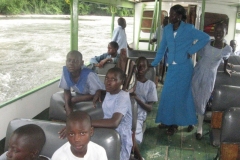 On March 19, 2012,  Bosco Oringa, former student at St. Bakhita School in Uganda, and Susan and Charlie Roscoe were invited to address the students and teachers in their classrooms at the Harrison Middle School (HMS) in Yarmouth, Maine, USA.  They presented the story of St. Bakhita School and the life story of Bosco Oringa. The teachers and administration of HMS selected Schools for Refugees as the charity for a week-long fundraising as a part of their  World Languages and Cultures Week. Under the direction and with the enthusiastic support of Mrs. Vicenzi, the students raised $1,100, which has been sent to the St. Bakhita school to buy materials to construct much needed wooden desks (tables) and benches for their classrooms.

Please go to the new section titled “Parents” to read interviews with three mothers of St. Bakhita School students who are struggling to support their children’s education.

The pen pal program, an exchange of letters between St. Bakhita students and Yarmouth (Maine) Harrison Middle School (HMS) students, is underway! Letters written by the HMS students were mailed to Uganda on January 20, 2012. Letters were received at St. Bakhita School on February 24! Students and teachers in both schools are looking forward to new friendships and an exciting learning experience!